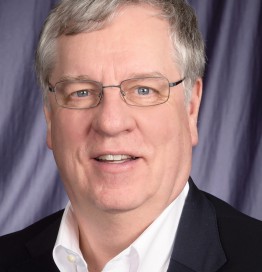 John Burg is the Founder of Acieta LLC of Council Bluffs, Iowa. Acieta, is a leader in industrial robotic system integration by designing, manufacturing and programming turnkey automation systems for a variety of manufacturing applications, including systems for welding, palletizing, assembly, material handling, material removal and machine loading /unloading. John spends much of his time evaluating customer applications for combining automation with their manufacturing processes.

John grew up in a manufacturing environment; his background includes extensive experience in heavy metal manufacturing. After graduating from the University of Nebraska, John spent the first few years of his career working for a capital equipment and supplies distributor, primarily in sales. In the early 1980’s, John had his initial experience with flexible automation. By 1983, John had co-founded Automated Concepts, Inc.
In 2002 John was awarded the Engelberger Award by the Robotics Industry Association for outstanding contributions to the robotics industry for applications.

The sale of Automated Concepts, Inc. (Council Bluffs, Iowa) to Ellison Machinery (Santa Fe Springs, California) in 2004 resulted in a merger of the company John originally co-founded in 1983 with the organization he ran, the robotics division of Ellison Technologies from 1988-2004. The merged company operated under Automated Concepts, Inc, until 2008, then the company became Ellison Technologies Automation.

In 2014, Mitsui USA the majority owner of Ellison separated Ellison Technologies Automation from Ellison Technologies and Acieta LLC became a wholly owned subsidiary of Mitsui USA. Acieta has plants in Council Bluffs, Iowa and Pewaukee, WI. John is past member of the Board of Directors of the Robotics Industries Association.
John has spent some time in the last few years lecturing about ways to keep American manufacturing from moving overseas; the “Save Your Factory” concept fits well into the philosophy of manufacturing that has sustained the Acieta organization for more than 30 years.